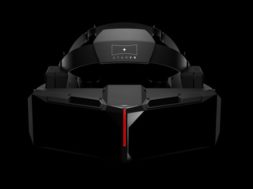 According to a new report, Acer might be quietly shopping around their StarVR HMD. The Taiwan based company has previously developed this unique VR headset in partnership with Sweden-based game developer Starbreeze.

Acer holds 63.25% stake and Starbreeze 33.18%, which gives majority shares to Acer. Acer invested $5 million into the company back in October of 2017 to become the majority shareholder. According a source from Digitimes, Acer has given StarVR 3 months to turn profitable or they will terminate and/or sell the company to a Chinese or Japanese company.

StarVR was first developed for the enterprise level where it provides a higher quality display than most headsets in today’s market.

The price of the headset currently floats around the $3,200 which is quite expensive compared to the consumer grade headsets. If StarVR One is to be terminated, all the employees working at the company will be brought into the Acer company.