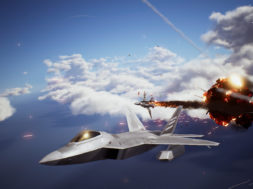 UPDATE (1/11/19): While Ace Combat will feature multiplayer mode, it may not be the case that it will be available on “VR Mode.” We apologize for the confusion.

The rumor of this release stems all the way back into 2017 where we first heard that the game was in production. Now we are on the brink of the release date and some new updates about the game are available. One of the most striking news is that there will be a multiplayer mode available in the game (maybe for VR in the future).

“The art of aerial dogfighting is one of the most dynamic forms of combat, experienced in three dimensions, setting the stage for a highly unique and challenging battleground. Now, with ACE COMBAT 7: Skies Unknown’s multiplayer mode, players can enter dogfights with their friends and coordinate battle strategy to take out opposing players.”

On top of battling in the skies in VR with your friends, Ace Combat 7 will feature additional features for virtual reality users. This includes a mode called Air Show where you get to watch a spectacular air show from any angle with a 360 degree view from an aircraft carrier. You’ll be able to admire these steel birds up close and personal in VR Hangar mode where you can view the fine detail of these jets from every angle as well as in the cockpit.

Ace Combat 7: Skies Unknown is currently available for pre-order for $59.99 on the PlayStation store and is set to release on January 18, 2019. There is no news yet as to if the game will be released on other HMDs at a later date. Make sure to get your headsets ready and rumble in the skies.