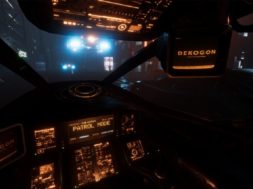 Recently we’ve seen a hyped up Kickstarter VR game called Zenith make waves around the media. With the game hitting over 625% of its goal, it’s no wonder why companies are choosing Kickstarter to fundraise their VR game projects.

Recently Iris VR has decided to do the same with a new VR title they are working on called “LOW-FI.” This new title is a follow-up to their past critically acclaimed VR game called Technolust.

LOW-FI is set to be a massive open-world sandbox adventure with action elements. The emphasis will be on exploration and character driven stories. Like a holodeck program, the player will be free to explore the city, further narratives, or just hang out in the arcades and back alleys spending their hard earned credits.

Moral grey areas can be explored via player choice in most situations through actions or dialogue trees. You will be able to make decisions such as taking a bribe rather than arrest a criminal, or even frame a third party for personal gain.

You are free to fly around your entire jurisdiction (section 303). Credits are awarded during your shift for both time and for duties (busts, etc.). Credits can be used at black market shops, dark web delivery systems, vending machines etc., for anything from ship upgrades to bribes or just some decorations for your capsule apartment.

About the LOW-FI world

In the game, LOW-FI is the street name given to those who cannot merge with The Platform, a ubiquitous virtual reality simulation where most of the population now live their lives. You are a low-fi police officer that has recently been transferred to a particularly crime ridden section of city-block 303. The only inhabitants of note in your jurisdiction are other low-fi, and human intelligence (or below) artificial life forms who have remained among the citizens after the AI singularity.

Somewhere, there is a crime happening. You’re the law around here, what’s your idea of fun? There’s plenty to keep you occupied. From investigating the death of the man you’re replacing as sheriff to the “white collar” crimes and petty street stuff. It’s up to you what you allow, and who or what you pursue.

Officially, almost everything the low-fi do is a crime. Meme-punks hacking ad-boards to show their dissent, crypto-kids hijacking everything with a CPU for monetary gain.

Unlike Zenith, Iris VR has fleshed out a lot of the components to the game already. “We’ve already spent a lot of time fleshing out the world of LOW-FI using only the profits from our previous title TECHNOLUST,” said the Iris VR team. “There are already many dense areas to explore and an entire city to patrol. Most of the work has gone into nailing the cyberpunk atmosphere and getting the basics in place. We’ve learned a lot over the past 6 years of VR development and think that now is the time to take things to the next level.

Right now, you can fly over the entire city with all the major PC VR hardware.  Many of the key systems are in place. Many locomotion and comfort options are in place. There’s some gunplay, a drone companion that follows you through the streets as your A.R. HUD highlights points of interest and information about your surroundings.”

Iris VR is well on their way to reaching their $45,024 mark already with over 588 backers. They still have 28 days to go so make sure to check out their page for more information.