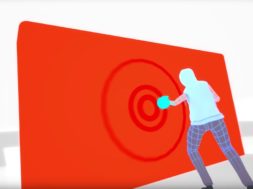 Currently, Beat Saber is the most dominant VR Rhythm game on the block. With your duel-wielding lighsabers its hard not to enjoy the game. However, a new type of VR rhythm called OnShape is on its way.

OnShape is a frantic VR game where players will have to dodge obstacles following the rhythm of each beat. You will perform different poses to go through silhouettes trimmed on walls that come towards you at a rising speed. You will also have to step away, crouch, punch blocks and catch power ups.

Game studio Odders Lab states that they will include a great soundtrack, on top of obstacles that will test your reflexes and skill while you exercise.

“To reach the best quality, our game designers teamed up with professional choreographers who performed the movements for each level, achieving a unique and satisfying experience for any player. OnShape will feature a set of songs on its release day but it will be periodically updated with more themes and game modes.”

-Singular gameplay with a mix of kinesthetic movements and music.

-Easy to learn and hard to master, each track is available in 3 difficulty modes.

OnShape will be available this summer in 2019. The team looks to release the game on several devices including the HTC Vive, Oculus Rift, Quest, PSVR, and more.