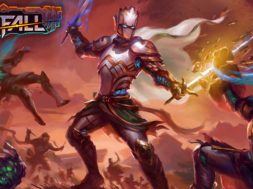 Creators of some awesome titles such as Star Wars: Jedi Challenges and I Expect You To Die, the new VR game is set to bring users a whole new experience in a magic infused world.

Until You Fall will incorporate VR sword fighting skills in a satisfying combat experience where players will have to master their own martial style and battle corrupted humanoids, monstrous creatures, and unknown horrors.

“We’re blending various styles of sword fighting to create an intense, real-time combat expe­ri­ence that hasn’t been seen before with VR,” remarked Jesse Schell, CEO of Schell Games. ​“Using our deep knowledge of these platforms, we believe this game will push bound­aries and leave players with the immersive mêlée fighting expe­ri­ence they’ve been craving.”

Not much else has yet been revealed by Schell Games but they expect it to make a splash within the VR community. The game is set to launch sometime in 2019 and it currently doesn’t have a price point or what platforms it will be available on.

tags: i expect you to die schell games star wars jedi challenges until you fall
previous Undead Citadel Might Be A VR Game We Can Get Behind
next HTC Announces Vive Focus Plus For The Enterprise Level
Related Posts