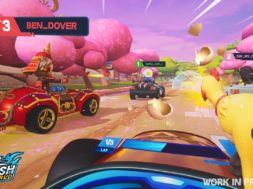 Motion X Studio has recently announced plans to launch a unique multiplayer VR kart racing game called Dash Dash: World which is rumored to bring that bedazzle that has only been seen on Mario Kart.

In the game, you will be racing and drifting with full-hand weapons and power-up controls. The game was designed to be fun for both beginners and experienced players.

Dash Dash: World will offer a plethora of characters to choose from. You will also be able to customize your kart for a personalized player experience. Players can choose from over 20 fully customizable karts as well as creating their own unique virtual version of themselves.

In the game you will be able to match up with online players instantly. Players can match against each other and race on beautiful themed tracks full of fun obstacles and boxes full weapons to destroy your opponents.

Dash Dash: World will take place in a friendly and whimsical place where alien robots, called the Carbos, transport players onto racing tracks via their magic AR headsets.

From grenade throwing to pulling a trigger, to smashing friends with a frying pan, players can discover and use unique weapons during the race.

Achievement badges and winning trophies can also be collected at the end of the race – where you can also show off your victory dance in style.

Dash Dash : World is set to release on the Oculus Quest at the end of October with future dates of release on all other platforms soon after.