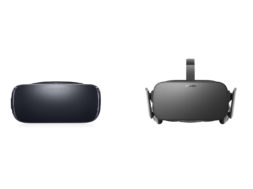 Oculus has been doing a well job in bringing in new fresh content for their Rift users. The Oculus library now contains hundreds of VR games and experiences that allow you to see things like you’ve never seen them before.

This year alone they’ve released and announced many amazing VR titles such as Robo Recall, Lone Echo, Echo Arena, and Marvel Powers United VR. While these are some tremendous titles, there are others out there that also bring joy and excitement.

Below is a list of 5 recently launched Oculus Rift games:

FORM is a newly launched VR game for the Oculus Rift where you inhabit the mind of a brilliant physicist named Dr. Devin Eli. You’ll be diving deep and exploring the physicists memories, dreams, and fears where you must assemble the pieces to the puzzle in order to unlock and open rifts to alternate realities.

While advancing through the game, puzzles and environments become more complex and intertwined, accessing the deeper and more distant recesses of Dr. Eli’s mind. By solving these puzzles and “unlocking” the constraints of Dr. Eli’s mind, you will ascend through progressively higher levels of consciousness to discover a path toward Dr. Eli’s true destiny.

FORM by Charm Games was initially released on the HTC Vive and has been ported over to the Rift platform. Make sure to give it a look today as we enjoyed the short VR experience.

In Spark of Light, you’ll be helping out the main character named Nerow who is on a quest to bring back the light of day and awake his friends who have lost their magical energy and fell into an eternal sleep. A mysterious person abducted the Sun-Bug which provided him and his friends with infinite light that kept them full of energy.

Now it is Nerow’s turn to save the enchanted forest he lives in and bring back the joy he once shared with his friends. This is a Gear VR game that’ll allow you to play in a side-scroller type of setting. Make sure to check out the curious adventure that Nerow embarks on.

A Night Sky is an exclusive Gear VR game by Coatsink Studio where you can sit by a campfire and enjoy the stars while hearing the crackles of ember. Using simple point and touch controls, player can connect the constellations above to form patterns among the stars.

As you discover the different shapes and constellations, you’ll start to notice strange and wonderful creatures that come to life. Watch as the stride, bound, and glide around the hillside in this majestical virtual world. The game is available for free so why not give it a go?

Ocean Rift is the world’s first VR aquatic safari park where you’ll explore the world that thrives underwater. You’ll be exploring the sea life and the creatures that live beneath including dolphins, sharks, turtles, orcas, sea snakes, rays, whales, manatees, sea lions and even dinosaurs

Ocean Rift allows you to visit 12 unique habitats that are full of various animals, creatures, and reefs. Included are places such as the coral reefs, ship wrecks, lagoons, arctic, and the deep prehistoric seas.

The education update features 45+ information points throughout Ocean Rift to learn more about the animals. This VR title can be experienced today on the Rift platform

You like frightening experiences in VR? Well, look no further as Obscura will definitely be pushing the limits to how horrifying a game can be. This creepy new VR title will shed a new light on atmospheric horror, that immerses you in an endless circle of fear.

You’ll be facing a relentless and almost invisible entity. The game will provide you with several tools at your disposal where you can use them to prepare your mind for what’s to come. In this vr experience you must keep your eyes wide open and your ears shot as you detect the environment around you.

The unique thing about Obscura is that it doesn’t rely on movement or violence. Rather, it’s made for players to experience a story that is fully randomized and unpredictable in events. Every new session will be new and refreshing. So if you are into scary VR experiences, Obscura might be up your ally. The game is available today on the Oculus Rift.

Continue to check in for new lists in releases for HTC Vive, Samsung Gear VR, and Oculus Rift games.